I spent Christmas in Morocco, visiting the imperial cities. It was a relief to see the sun which seemed to be having its own holiday far from Britain. Morocco is a colourful and interesting country with plenty of contrasts.

We had been able to see the lights of the cities as we flew south across Spain and north Africa but fog in Casablanca where we were to change planes delayed our arrival in Fes until next morning. We flew over several lakes and maybe reservoirs in the hills and as we neared Fez the earth became dark red.

In the afternoon we were taken for a drive to the outskirts overlooking the city. The weather was clear so the views were good, next day it was more cloudy so we had been lucky. The main viewpoint across the ancient city of Fes is known as the Merinid Tombs and we explored the area on foot. There are the remains of a palace which looks more like a fortress and below on the hillside are the remains of an Islamic necropolis wrapped around the hillside with a few larger tombs some resembling little houses among the many small ones. Below us, surrounding the city, is a length of wall, the oldest parts of the defences, some dating to the Almohad period (12th 13th century) with an Almohad gateway. The city walls all have holes, they are not putlog holes [we see them in church walls where scaffolding had been used], since there are too many and even new walls have them. At last we learnt they are a temperature regulator so that the wall can expand or contract without cracking because of the extreme temperatures.

Next morning we spent walking in the M'dina led by Rashid, a university lecturer earning extra money as a guide. We entered the souk through the Moulay Ishmailia gateway which is being restored; it has taken two years so far. Nearby is the big gate Bab Boujeloud [Father of the Soldier and Bab means gate]. The outside of the gate is decorated mainly in blue tiles, the blue of Fes, inside the gateway are mainly green tiles; the green of Islam. To the left, as we stood inside we could see the back of the water clock Dar el Magana [House of Clock 1357]. Water is distributed from the highest areas to the lowest along canals; each new district inside the Mdina has to have a water supply, as well as a mosque, merdessa [college] and public bakery. It was not easy to see where the districts changed because it is like a rabbit warren and some seemed quite close to each other. We saw few names on streets and those were in Arabic. This souk is so large that it would have been quite easy to get lost so we made sure this didn't happen despite the many distractions.

After lunch we visited The Musee dar Jamai on the edge of the square near the entrance to the souk. It is in a residence built c.1882 by Mohammed Belarbi el-Jamai, vizier to Moulay el-Hassan 1873-4. The upper rooms in particular are highly decorated, one room filled with cushions and sofas was very opulent with a decorative ceiling. Outside in the 'Andalusian' garden were plenty of tall shady trees and daturas in flower but with a slight feeling of neglect about it.

We spent Christmas Day in the countryside beyond Meknes, we looked out for vineyards but saw none. We did however see paper white narcissi growing wild along the roadsides and in patches in some fields.

We bought our lunch down in the market, bread, cheese and clementines before leaving to walk to Volubilis. When we reached the top of the hill we had a clearer view; there we sat in the sunshine for our Christmas lunch. On the walk down to the site, across the hillside, I noticed very low growing Arysaemas, the brown hoods barely out of the soil. I pointed them out to people near me who wondered what I was looking at, Krista said they come out for Christmas in Tunisia. I also saw lavender, very like the new feathery one, Lavender ‘Christiana’, which appeared in English nurseries last summer; I first saw it in pots on Tresco where it was called Lavender canadensis. There were also a few tiny pinky up-right bells later identified by Richard Hobbs as Romulea leichtlinii.

On the way back to Meknes I saw a grey wagtail and more cattle than we have seen the whole week attended by flocks of cattle egrets. There are few birds to be seen, except in the gardens.

Next day we began the two day drive to Marrakesh. We left the main road to drive into what is known as the Cedar forest although other trees grow there including holm oaks. On the second day our lunch stop was to be at the Cascades d'Ouzoud, 130km to the south-west of Beni Malal where we had stayed the night.

Marrakesh is a very green city. There are a number of gardens in and around Marrakesh. After exploring the city we visited a famous garden the Majorelle Gardens or Jardin Bou Saf. The Majorelle gardens are very different from what I expected. The garden is named for Jacques Majorelle, son of a famous furniture maker who was born in Nancy in 1886. In Marrakesh in 1919 to pursue his painting career he bought land and in 1924 began to create the garden which he opened to the public in 1947. Following a car accident in 1962 he returned to France where he died. Much later it was bought by Yves St Laurent, who with Pierre Berge, restored the property and established a trust to ensure the future of the garden. The garden was featured at Chelsea in 1997. 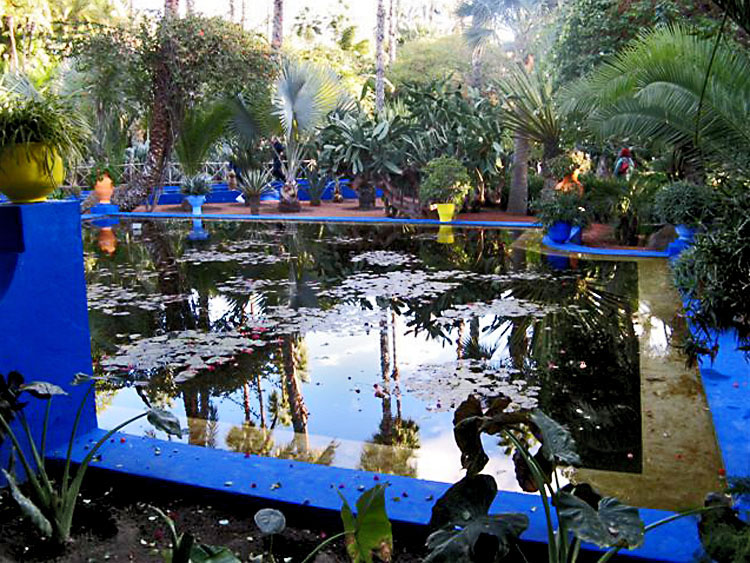 We'd seen bougainvillea in the mosques and the Saadian tombs, poinsettia tree, daturas, and plumbago hanging over a wall so expected something similar. Here pink jacaranda, resembling hangings, was over the walls near the entrance but the colour of the circular walls inside the entrance was strong orange; beyond ,bright blue rules with pergolas of lemon yellow, apple green and pink. The plants too were different, cacti of every shape, succulents and bamboo groves predominate as well as palm trees of various kinds. It covers twelve acres and is beautifully kept with grit under the cacti, some in flower, some with seeds, and saucers formed in the soil round the succulents to catch water and several geometrically shaped pools with water lilies. The water on one pool was level with the top and it was in its reflection that I was able to include the height of the trees in the photograph. Further round is a shady area under bamboos and tall trees. The cobalt blue Art Deco pavilion houses a picture gallery of engravings and drawings collected by Majorelle, a museum of Islamic arts collected by St Laurent and a boutique. Alas there wasn't time to make notes - I am not that enthused by cacti - but the plants were labelled. We had enjoyed an interesting, colourful holiday in the sun with snow on the mountains as a backdrop.