A LITTLE BIT OF CHILE

Chile – that long thin South American country; it is 2,700 miles long but only 217 miles wide at its widest point. The mighty Southern Ocean is at its southern tip and the driest non polar desert in the world, the Atacama, meets Bolivia in the North. 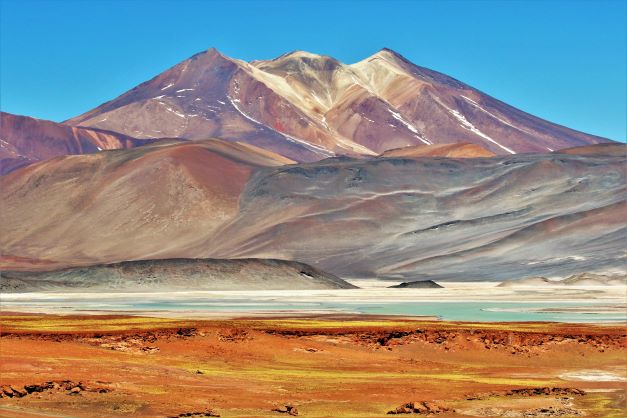 It’s western shores are washed by the Pacific Ocean and the Andes form a backbone to the East. It is not, therefore, surprising that in such a country there are many habitats and environments for the flora and fauna. The central area of Chile, around the capital Santiago, is one of only five regions in the world with a Mediterranean climate characterised by hot dry summers and warm, wet winters.  (Others are coastal California, the Western Cape of South Africa, southern and southwestern Australia and the Mediterranean basin). Central Chile is an excellent wine growing region – many of you, I am sure, will have drunk wine from the vineyards from the area. Plants that thrive in this climate include Bromiliads such as Puya venusta and Puya chilensis; they are often visited by hummingbirds. 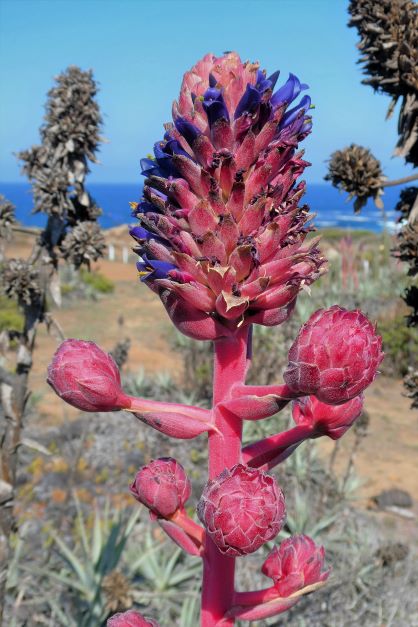 As you would expect, plants with leathery leaves abound including Pouteria spendens which is endemic to the area. Due to the current rates of habitat loss it is considered endangered. What you may not expect is to see plants of Alstroemeria species growing in what appears to be quite hostile, rocky places. This sort of environment shows so forcibly a plant’s determination to survive.

The sandy shores of the Pacific offer plants such as Nolana paradoxa and Cistanthe grandiflora; both plants have the fleshy, water retaining leaves that helps them survive the dry hot summers. 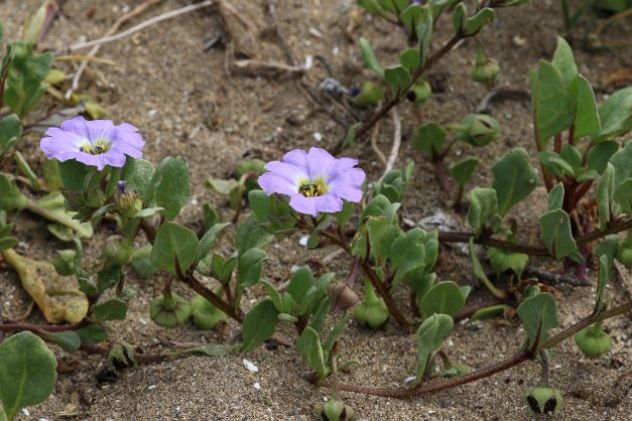 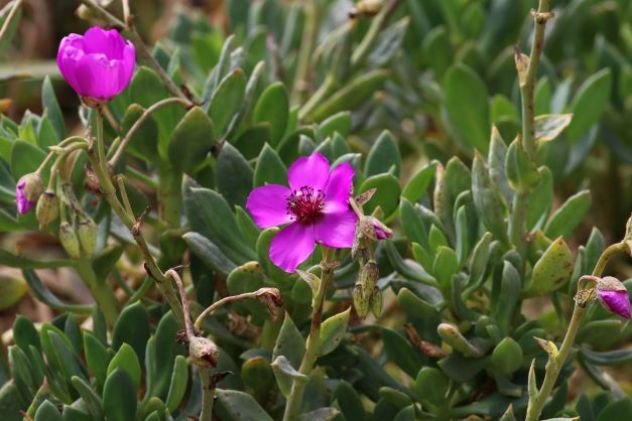 Nearby you can find the moustached orchid, Bipinulla fimbriata and you may also be lucky enough to see the smallest otter in the world, the Marine Otter.

Inland one finds La Campana National Park, visited by Charles Darwin in August 1834. He climbed the bell shaped mountain and declared ‘Here you can see Chile and its boundaries, the Andes and the Pacific, as if in a map’. This National Park is home to a stand of Jubaea chilensis – the Chilean Wine Palm which is endemic to the area and considered vulnerable; it is the second most massive extant palm species. The sap can be used to make palm wine and palm syrup but the whole tree has to be felled so the practice is restricted by legal protection.  Its small coconut like seeds are beloved by the small scurrying rodent called a Dagu.

Also found here is the holoparasitic plant Tristerix aphylla or the cactus mistletoe. If any of you watched the David Attenborough programme ‘The Green Planet’ you will have seen the amazing way this plant parasitizes the cactus host.

Further north on a mountain ridge, in the cloud cover and almost at the edge of the Atacama is the Bosque Fray Gorge National Park – a UNESCO Biosphere reserve. This park is known for having the northernmost Valdivian temperate rain forest, characterised by dense understories of bamboos, ferns and for being mostly dominated by evergreen, angiosperm trees, some deciduous trees and conifers.  Plants such as Drimys winteri, Senecio planiflorus and Griselina scandens are found there. 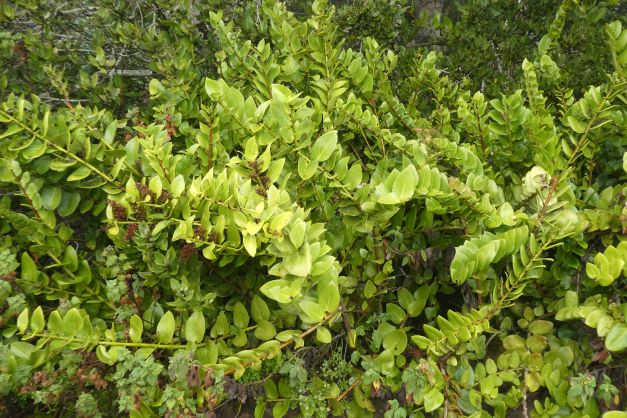 This is a really bizarre habitat that depends entirely on the condensation of the coastal fog know as the Camanchaca, which hangs on the mountain slopes and moistens the vegetation, allowing what is known as a hydrophilic forest to survive despite being surrounded by arid, cactus covered hillsides.

Heading even further north, on the Pan American Highway, the Atacama asserts itself and you can see ‘meadows’ of lomas vegetation. Again, these plants are watered by the coastal fog – known also as mist oasis, but how different they are to the forest plants at Fray Gorge. 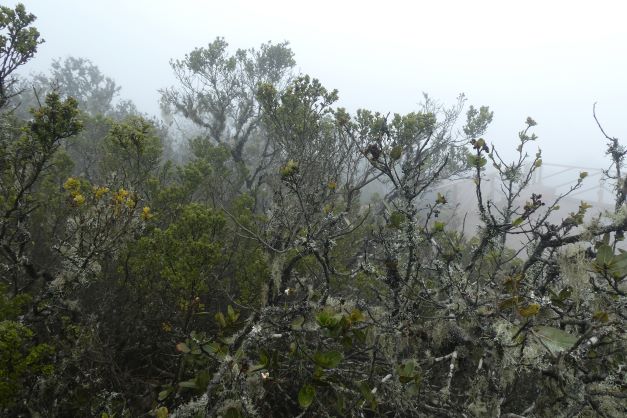 Cactus abound, including many different species of Copiapoa. 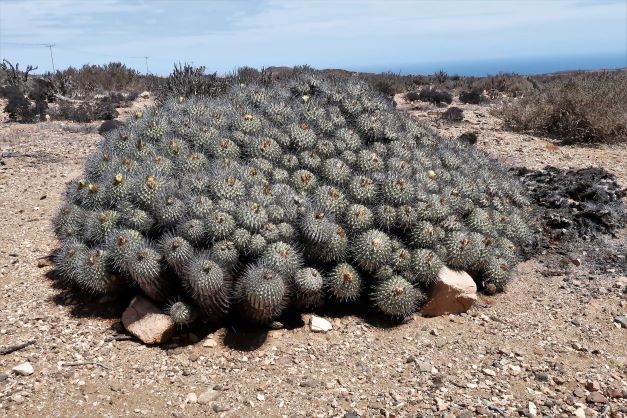 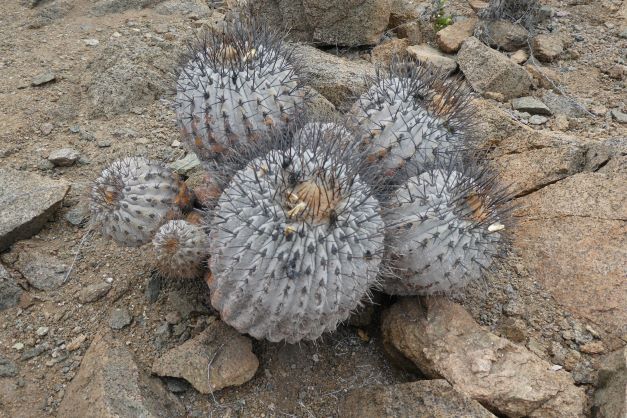 You can travel for 70 odd miles, stopping every few miles and you will find different species of this cactus. Large examples are, perhaps, up to 200 years old and quite magnificent. When they die, however, they resemble the ashes of an old bonfire.  Conversely, you will find areas of flowers, perhaps in a gorge that has received enough moisture to promote flowering, such as the diminutive Clelome chilensis and Solanum chilensis. 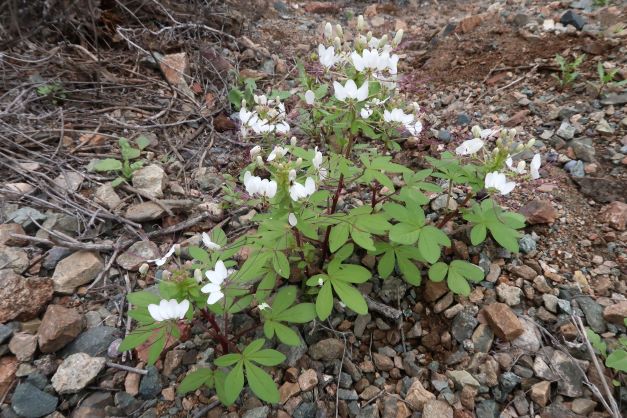 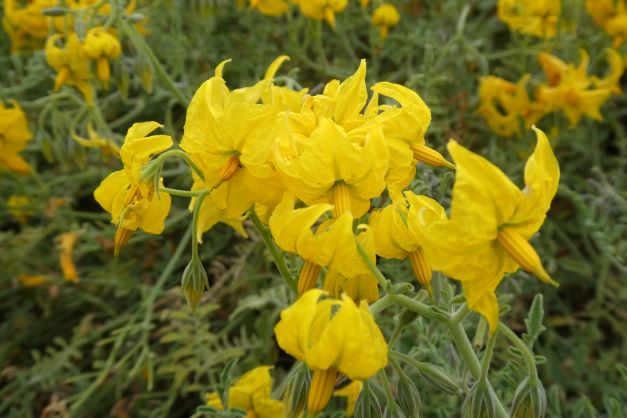 As you continue north the Atacama looks like most people’s idea of a desert as you cross the line of the Tropic of Capricorn. Even here, though, plants survive, such as Lupinus oreophilus and Cistanthe amaranthoides. 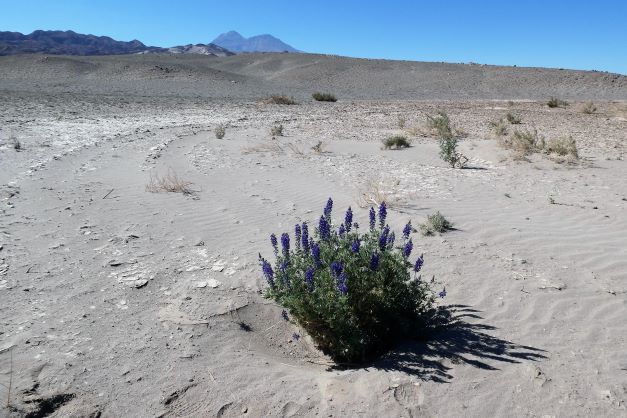 However, at times, especially at sunset, this desert can present as one of the most beautiful landscapes on earth.  Now the road begins to climb as you head towards the Altiplano – the most extensive area of high plateau outside of Tibet, with an average height of 12,300 ft. Here the smallest of the camelids can be seen – the Vicuna browsing on the grasses such as Stipa and Festuca. 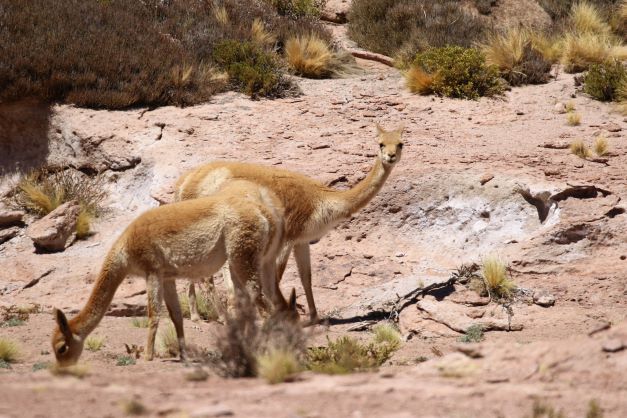 Having travelled this far north, it is worth returning to Santiago in order to fly 416 miles west to Robinson Crusoe Island – part of the Juan Fernandez Islands. Although it was discovered by the Spanish in 1574, it was here, of course, that Alexander Selkirk was marooned in 1704 for 4 years and 4 months and gave rise to Daniel Defoe's book. The island comprises steep volcanic peaks that rise out of the Pacific Ocean. It has a subtropical climate and of the 285 native plant species, 144 are endemic.  Sadly, though, many are threatened, mainly by introduced plants such as the Rubus genus. 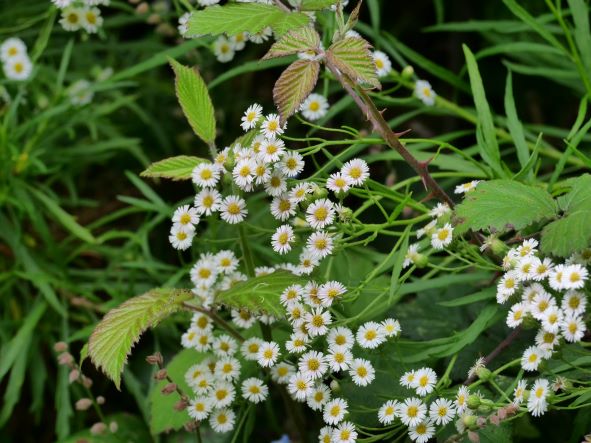 There are a number of endemic ferns and gunnera, including Blechnum shottii and Gunnera bracteata along with Dendroseris littoralis -  the Cabbage Tree – which remains critically endangered. 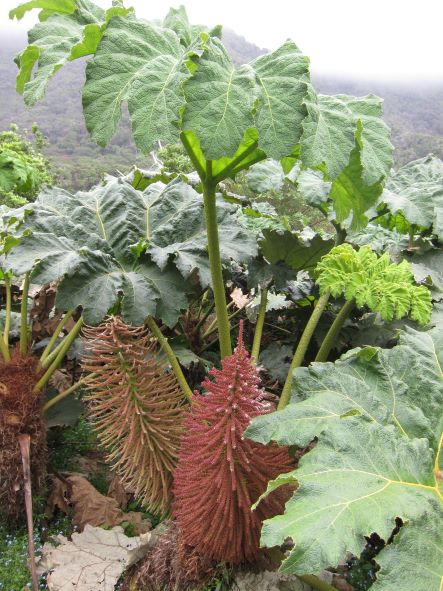 It is thought that Selkirk would have eaten the leaves of this plant in his efforts to survive. There is also the most beautiful endemic hummingbird – the Juan Fernandez Firecrown. Oh, and this is definitely the place to go if you enjoy eating fish and especially lobster as the islanders make their living from fishing, specialising in lobster! 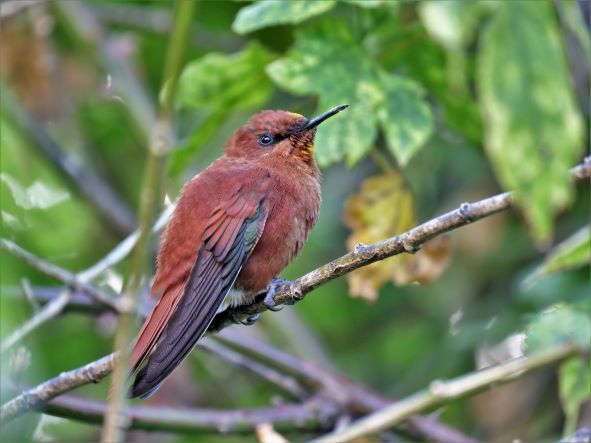 Back again to Santiago and then travel south to the island of Chiloe. It is the second largest island in South America and is very different from the north being cooler, wetter and greener. It also has areas which have experienced extensive periods of isolation from other forested ecoregions so that there is substantial endemism. It is here that you will find a Valdivian temperate rain forest in its rightful place, rather than on the edge of a desert nearly 800 miles to the north. It’s the most wonderful place in which to walk with waterfalls and beautiful trees, ferns, gunnera and much more. 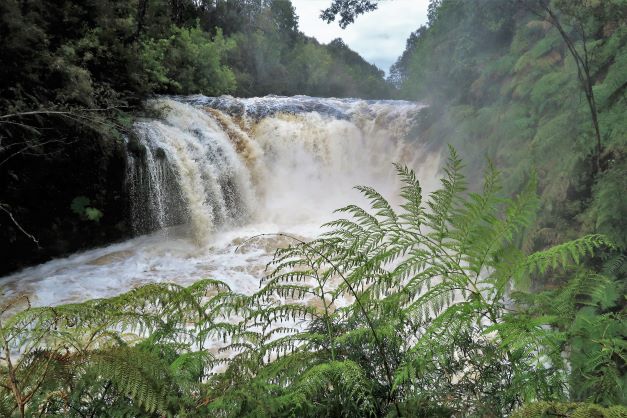 Plants that we recognise and grow here include Crinodendron hookerianum and Embothrium coccineum, along with Gunnera tinctoria. 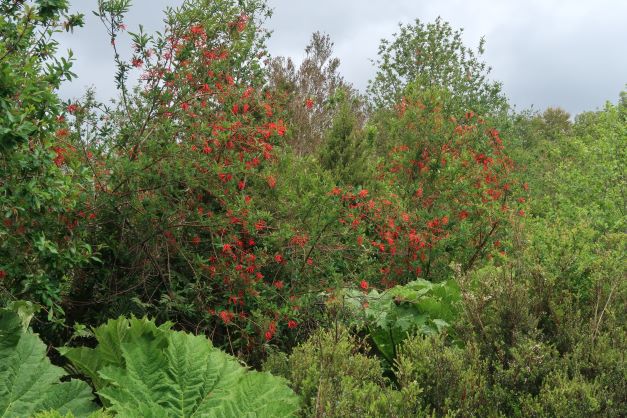 There are also examples of massive and ancient Podocarpus nubigenus – perhaps 800 years old. 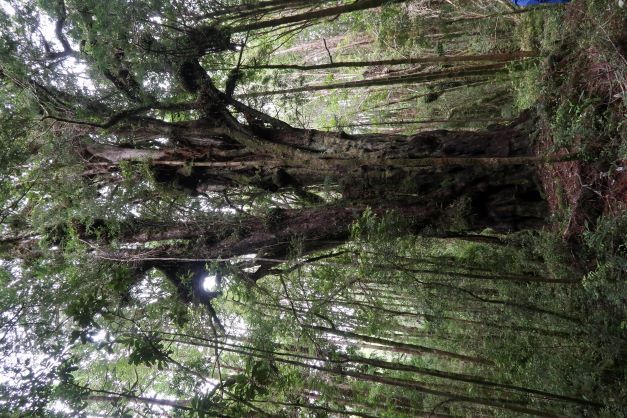 Chiloe is home to the smallest deer in the world – the diminutive Pudu and, if you like boats, it is worth taking a pelagic trip to see some of the impressive seabirds including Albatross and also Penguins – both Humboldt and Megallenic. 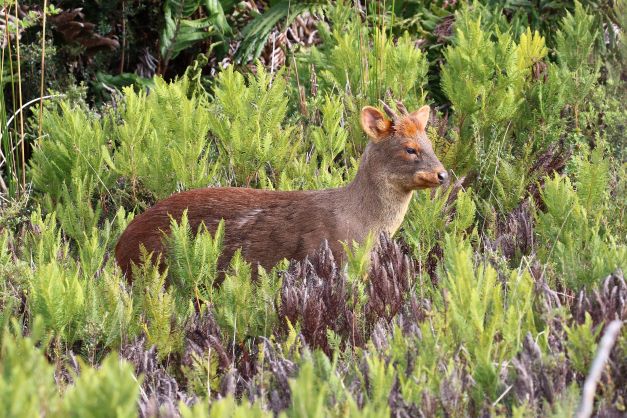 Chiloe and Peru have, over many, many years had their disagreements, usually about borders and who makes the best Pisco sours – a really delicious cocktail! However, one disagreement concerns potatoes. Peruvians say that the humble spud comes from an area near Lake Titicaca. However, researchers in Chile have found evidence showing human potato consumption as far back as 14,000 years ago in southern Chile. Today, 99% of all European potato varieties can be traced back to Chilean origin, specifically, the island of Chiloe. Food for thought next time you are eating your potatoes!.

Finally, you may wish to fly much further west – 2,700 miles to be precise, to Easter Island or Rapa Nui as it is now known. Settled by Polynesians, most probably from the Marquesas Islands between 800 and 1100 AD, the island was formed by 3 volcanic eruptions. Once upon a time it was covered in sub tropical forest and it is, of course, famous for the Moai statues who represented deified ancestors. It was their role to harness energy or mana to protect the villages and the people. 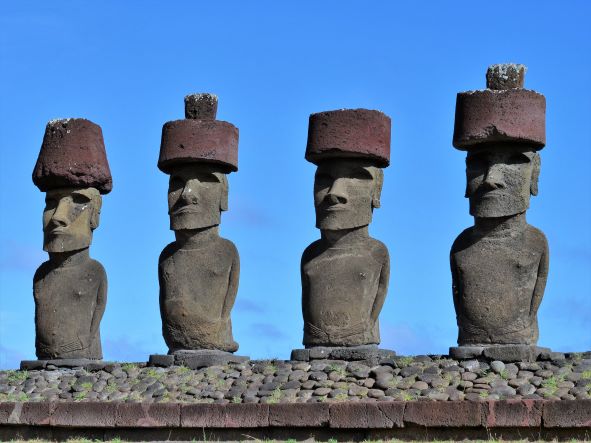 The island was annexed by Chile in 1888. Nowadays, the vegetation is that which has been introduced as over the years the early settlers stripped the land of all the native vegetation. Why that happened and why the Moai were toppled over – something that had to have been done by man, not a natural disaster, is not known, although many theories remain. These days, a number of the Moai have been restored to stand once again on their platforms and efforts are being made to introduce plants that would have been there originally such as Sophora toromiro. Let us hope that those efforts are successful.

As the weather forecast looks good - and we’ve finished clearing the storm damage - we’d very much like to invite you to a last ‘hurrah’ for the snowdrops this Sunday 27 February anytime between 10 am - 4 pm.  As before could you please bring your own mug and wear sturdy footwear as the paths and steps are steep and it has been very wet this week. Funds raised will still be for Kings Care and will be £4 per head to include coffee/tea/biscuits and, hopefully, homemade cake. Although the snowdrops are fading there is still lots of colour with mini daffodils, hellebore, iris and lots of other interesting things to see.
The address is 4 South Avenue, Thorpe St Andrew, NR7 0EY (opposite River Green on Yarmouth Road) and we look forward to seeing you.   Sue, Graham and Rosie 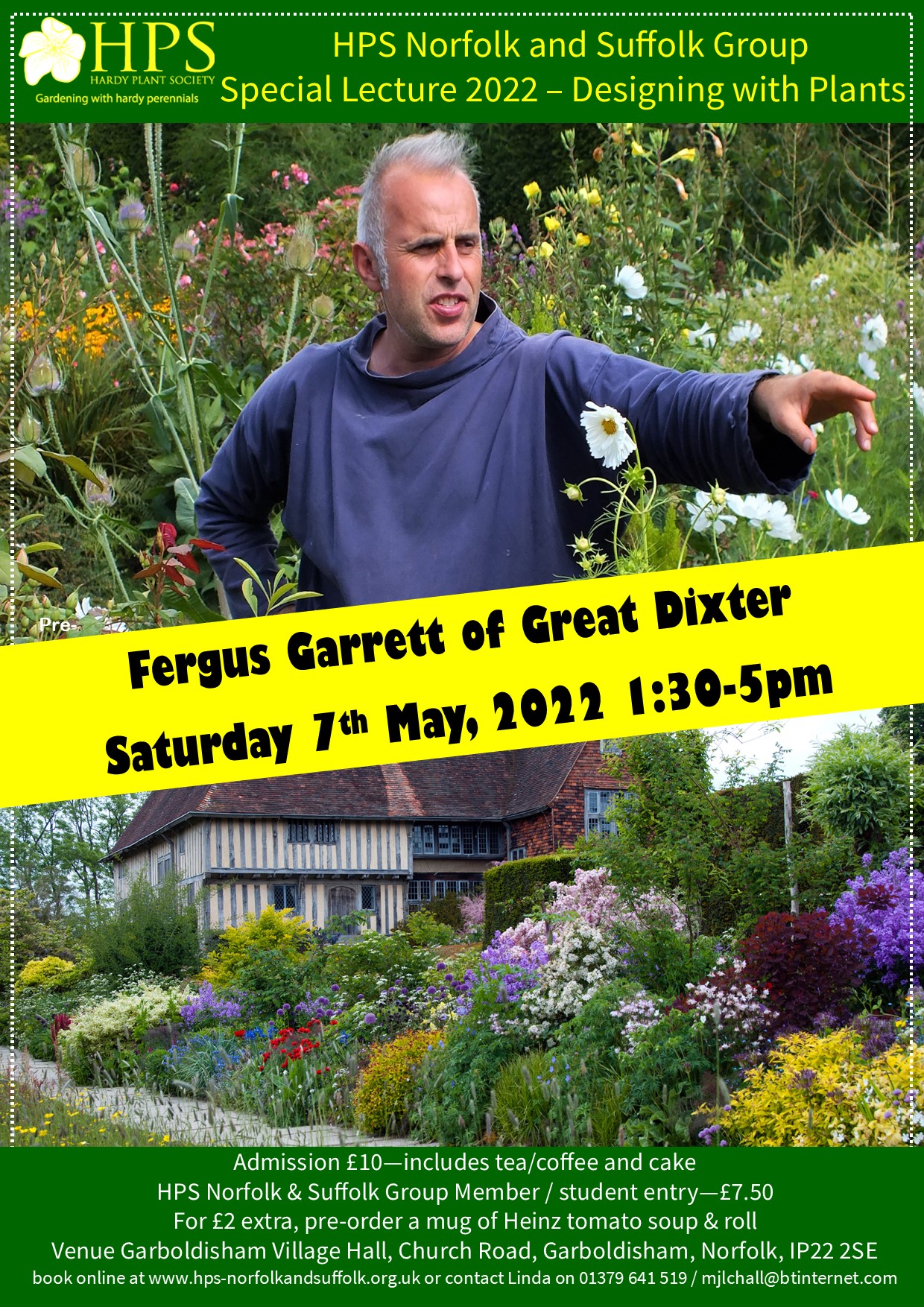 THIS EVENT HAS NOW SOLD OUT

This is a ticketed event also open to the public – bookings in advance.

Tickets are now available and can either be purchased online here for payments by debit or credit card or by contacting Linda Hall on 01379 641519 or This email address is being protected from spambots. You need JavaScript enabled to view it. to pay by cash or cheque.

Nurseries present on the day will be Panache Plants (https://www.panacheplants.co.uk/), The Plantsman's Preference (https://www.plantpref.co.uk/) and Richard Mountstephen Sundries and Plants.

The Open Gardens website provides advice and assistance if you are planning on opening your garden.

It also provides listings of open gardens if you are looking for a garden to visit.

Norfolk and Suffolk HPS member, Sarah Clark, will be opening her garden as part of The Great Garden Trail, in aid of St Elizabeth Hospice, on Sunday, 4th July, 11-5.

Beech House is not huge but within 1/4 acre there is a herb garden, summer fruit garden, pond, bog garden, woodland walk, veg patch, greenhouse, meadow, and herbaceous borders full of common and unusual plants, especially Salvias, some planted in the naturalistic style.  All the plants show what can be grown on poor sandy soil very near the sea.

There will be a plant stall and light lunches, tea and home made cakes will be for sale.