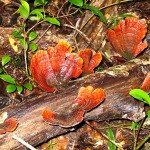 Only the hardy and audacious visit Madagascar in the wet season- the roads are impassable. We went during the dry season, and the roads weren’t wonderful then, vehicles veer from side to side trying to avoid potholes, broken verges and ruts. Like the wealthy Malagasy, we took to the air for any long trip. First stop the capital Antananarivo (Tana). An excellent plant exhibition included Darwin’s orchid Angraecum sesquipidale that has a spur up to 35cm long. Darwin predicted, to considerable scepticism, there’d be a pollinating insect with a tongue long enough to reach the nectar at the base. Twenty years after his death he was vindicated, when a moth with such a tongue was discovered in Madagascar.

Madagascar may look small on the maps but it’s 2 ½ times larger than the UK, a tropical island lying south of the Equator, 400km off the east coast of Africa. The people are very mixed racially. It’s thought Indonesians arrived first some 2000 years ago, followed by mainland Africans, Arabs and Indians. In 1896 it became a French colony and achieved independence in 1960. The island is divided by a high central plateau running roughly north south, the highest land being between 1000 and 3000m. The north and east receive tropical rain, but the southwest is extremely dry. 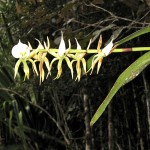 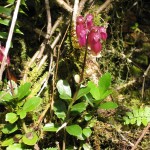 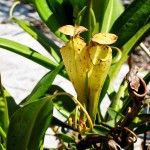 We took the local plane from Tana to Toliara in the southwest. Our excellent local guide had a good botanical degree from Tana University and he lost no time in taking us to an arboretum to give us a taste of the spiny forests. My, was it hot! Some of our number, I regret to say, made swiftly for the cafeteria for a chilled beer, excuse being jetlag. The vegetation, unlike us, is well adapted to these conditions. Thickets have few or thick cuticled leaves. Plants store water in trunks and roots and lose leaves in the dry season. 90% of these plants are endemic to Madagascar, many in the Didiereaceae family. No, I hadn’t heard of it before either (and I can’t pronounce it!). According to recent genetic sequencing they are related to some African plants - they are decidedly weird. Didierea madagascariensis (no common English name, of course!) has long thin branches stretching straight up from a short trunk. They are covered with lethal spines, though the lemurs and chameleons manage to climb among them and chew the small leaves that erupt from the trunk. Villagers stick the branches upright in the ground to form barriers round village and animal compounds. 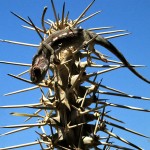 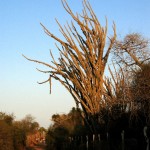 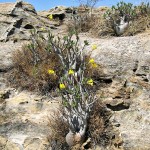 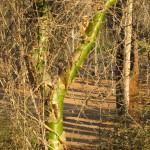 Of the eight Baobab (Adansonia sp.) known, six are endemic to Madagascar. Seven of us circled one Adansonia grandidieri to measure its circumference. It was said to be 1000 years old but ageing these trees is unreliable as the trunks are water storage vessels and lack obvious rings. 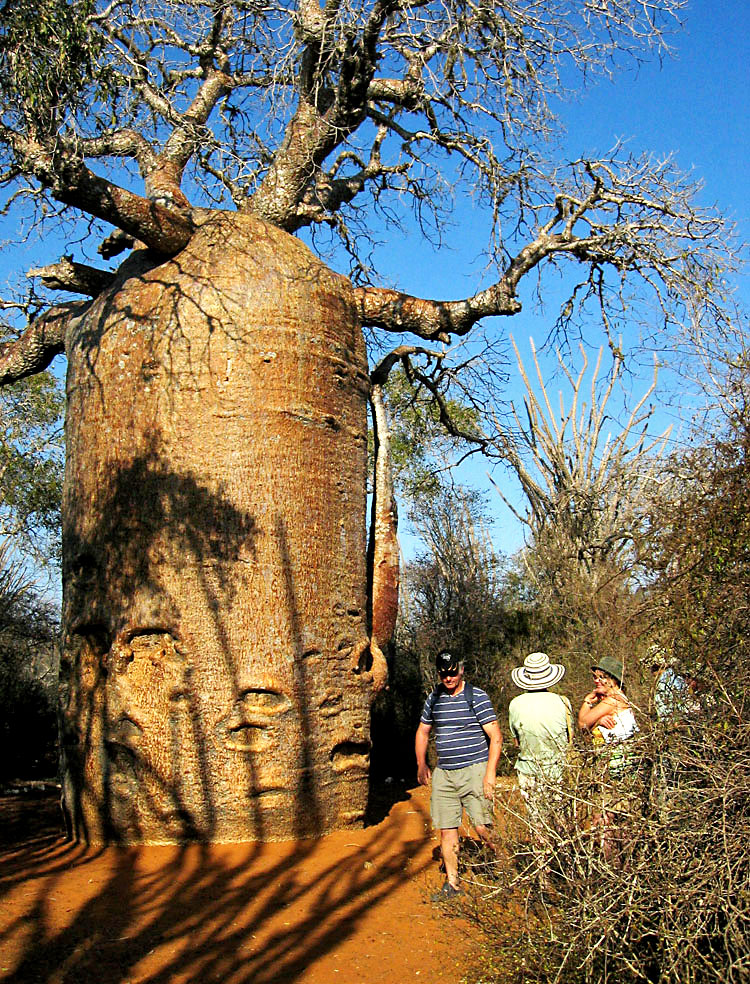 Locally baobabs are called Renala or Mother of the Forest. Their fruit makes juice, jam and rum. Local people use the fibrous bark to tie reeds together into panels that make up their dwellings. The trunk is hollowed out to make canoes (pirogues). Another tree used to make pirogues is the yellow flame tree (Delonix sp. Fabaceae). It has golden pea flowers and a shiny green photosynthetic trunk. The little pirogues are prettily painted to protect them from salt water, but they only last a few years so slow growing trees are inexorably reduced. To preserve them Reniala Reserve (45 hectares of spiny forest) germinates and grows baobabs in its seedling garden. 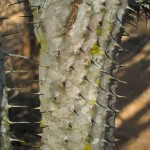 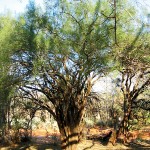 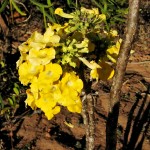 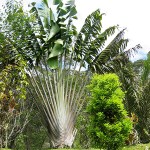 Forest plants are used for medicine and food but also for fuel as Madagascar has no other fuel resources. All along the roads charcoal makers sell their sacks, much of it made from pristine forest. As tourism increases, bringing in welcome foreign money, so does the use of charcoal for cooking. Our guide is trying unavailingly to encourage use of other woods like fast growing eucalyptus, but villagers see the forest as their ‘mother’, and believe its resources are endless.

We went by road to Isalo National Park in the central hills. En route we were almost engulfed in a woodland fire. These are lit deliberately to increase grazing for zebu or by cattle rustlers use fire to hide the tracks. Transgressors receive a prison sentence. The endemic vegetation doesn’t regenerate as some Australian plants do. Mining settlements along the road have a Wild West reputation for violence. Malagasy miners hand dig 15m deep in old river deposits searching for sapphires - some are red! The middlemen come from Sri Lanka and India.

Isolo Park’s savannah is dotted with tapia trees (Uapaca bojeri), a plant which has some fire resistence, and noble palm, Bismarkia nobilis. Red Madagascan periwinkle (Catharanthus roseus) grows everywhere. It’s the chief source of a drug used in cancer treatment, and is being assessed at the John Innes Institute in Norwich. The rare dumpy elephant’s foot, Pachypodium rosulatum, is only found on cliff faces now as accessible ones have been stolen. They make a lot of money on E-Bay.

River gorges cross the savannah and green gallery forests grow abundantly along their banks. We swam in a beautiful warm river pool under towering Pandanus imeriensis. From the arid southwest we flew to Berenty Reserve in the southeast. Rainfall is higher so the native vegetation is lush. Paddy fields abound, but locals eat yams and sweet potatoes, using rice as currency for buying zebu, a sign of family wealth. Berenty itself is in the middle of thousands of hectares of sisal plantations as Madagascar, a poor country with few resources, sells sisal to the EU. A thought – as you carry your environmentally-friendly sisal bag to the supermarket of your choice, remember the ever increasing sisal plantations of Madagascar and the retreating natural forests. 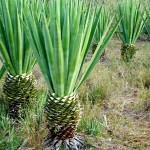 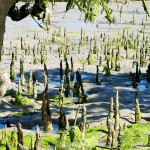 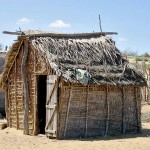 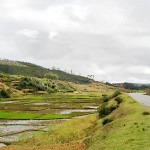 This reserve is the one you see in TV documentaries on Madagascar and we watched ringtail lemurs playing with their babies and the famous dancing lemurs. Pad cactus (Opuntia sp.) from South America are a problem though the lemurs will nibble them. All 5 species of crocodile tree, Alluaudia grow here (Didiereaceae again), much taller than in the southwest desert. If you trip and grab a tree to steady yourself, you’ll impale your hand! Kalanchoe beharensis is a small endemic tree with large furry greyish leaves. It’s named after the village of Behar where it grows.

Many euphorbia trees and shrubs grow in Berenty. A large tree with ferny leaves and thick trunk, Maerua filiformis is a brassica! The seed of Uncarina sp (sesame family) has viciously curved spines, far worse than any sticky burr. It can bind trouser legs together and is used as a rat trap. Finally we visited pristine tropical forest east of Tana where southerly winds bring considerable rain. As it was Madagascan spring, men were ploughing the fields using zebu cattle and simple mouldboard ploughs. Peas were abundant, also marrows and gourds, oats were grown as a winter crop. In dry paddy fields families made bricks from clay for the extensive building programme in Tana.

The forest trees included magnificent blue pine, liquid amber and wild banana. Individual trees of the same species are well separated. Moss covered lianas grow everywhere, making progress difficult, and photography well nigh impossible. Orchids clamber here and there among the trees. We managed to classify a few, (for the erudite, Kew Gardens publish a book on the 250+ orchids of Madagascar!) Madagascar plantations grow and export vanilla orchid pods, originally from Central America.) Red bellied lemurs played high in the trees and we watched a brilliant orange pigmy kingfisher for a long time, its main diet is insects, not fish, and eerie singing of indri (the largest lemurs) accompanied us -their voices carry up to 3 kilometres. 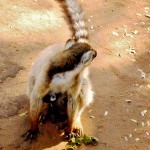 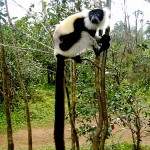 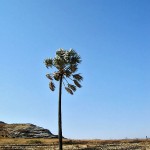 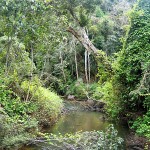 A beautiful and fascinating country, if you get the opportunity to visit, take it!